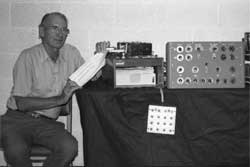 As a young psychologist, John R. Knott, Ph.D., became confronted with the new science of EEG in the 1930s, influenced by his mentor L.E. Travis. As told by Ernst Niedermeyer, M.D., “Soon he stood on his own feet, constantly striving for better technology and greater understanding of the frequency components of EEG and, in particular, of its development in the course of human maturation. As a radio amateur since adolescence, his interest in electronics was not limited to biological amplifiers. He remained faithful to his old hobby until the end of his life. In this manner, he became a veritable wizard in the world of oscillators and amplifiers. This phenomenal technical know-how was just the basis of his comprehension of the EEG phenomena. The EEG signal, its polarity and propagation, was the cornerstone of his edifice of EEG comprehension.”

Dr. Knott created the EEG Laboratory at the University of Iowa in 1939, one of the first in the nation. In so doing, he was instrumental in developing, and later defining, the role of EEG technician/technologists that we have inherited. Dr. Knott led and shaped the neurodiagnostic profession in many ways through countless hours of dedicated scientific endeavors in electroencephalography and in service to EEG technology.

Dr. Knott worked throughout his career for the betterment of EEG technologists. He was co-editor of the American Journal of EEG Technology from 1966 through 1973. He served as member and chair of the Joint Review Committee on Education in EEG Technology (JRC/EEG). He co-authored the textbook “Fundamentals of EEG Technology”. He was the moving force behind the formation of ABRET, traveling across the entire United States, organizing regional examinations and convincing technologists that, through ABRET, there was a road to increased professional status.

Originally conceived by Albert Grass and John Knott, the John Knott Educational Lecture program is a lecture series designed to bring distinguished speakers to an ASET Chapter or area society meeting, thereby providing exceptional educational opportunities for technologists who might be unable to attend the national meetings. ASET Chapters and local, state, and regional societies representing the interests of neurodiagnostic technologists are eligible for the opportunity to host a Knott Lecturer.

To be considered to host a Knott Lecturer, the chapter or society must complete the Request for Lecturer form in full and return to the ASET Director of Education. ASET Chapters and local, state and small regional societies will receive consideration over the large regional groups who can better attract experienced speakers. Selection also will be based on the order in which applications are received; how recently the chapter or society has hosted a Knott Lecturer; and the information presented in the Request for Lecturer application. Three choices for topics to be presented should be specified on the form. The expected attendance for the meeting should be 30 or greater. A minimum of 45 minutes should be allowed for the presentation. The lecturer’s presentation should be delivered to the largest gathering of participants, i.e., to the general session, and not a smaller discussion or workshop group. If workshops or open discussion are planned, the lecturer may be considered for participation in addition to his or her lecture.

The John Knott Educational Lecture program is supported by interest earned on a restricted fund as well as by member contributions to the fund. The ASET Foundation is responsible for the fund management and annual selection of the host chapter or society. The ASET Foundation covers the costs of hotel, travel, and meal expenses incurred by the lecturer and a lecturer honorarium. The Foundation supports one Knott lecture presentation within its fiscal year.

Application forms are accepted for chapters and societies to request a speaker for meetings held from September of the current through August of 2020. The deadline for applications is June 1.

As instructed on the Request for Lecturer form, please send completed applications to Linda Kelly, ASET Director of Education. For more information on the John Knott Educational Lecture program, contact Linda at 816.931.1120, ext. 108.