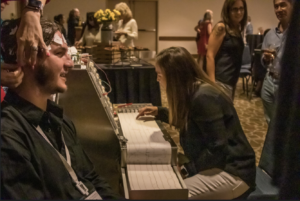 In 2003, the ASET Education Committee, under Chairman Lewis Kull, had some very important decisions to make for the future of education in the field. Incidentally, at one of the committee meetings, it was mentioned that our past Executive Director, Fran Pedelty, had said that ASET needed a Foundation to fund raise for scholarships since ASET was not a 501(c)3 organization.

California College of Health Sciences had been providing distance education courses in EEG that had been developed with the help of ASET’s Education Department and ASET members. CCHS decided to close the program. Under the original agreement with ASET, CCHS was to give the courses to ASET if they ended the EEG program. The ASET Board of Trustees voted to accept the courses and reformat them with additional content and make them available as online courses. This expanded the scope of ASET’s educational offerings and opened the door to make quality education available anywhere.

Intrigued by the idea of a foundation to be the fund raising arm of ASET, Gail Hayden, ASET Executive Committee member, began researching how that could happen and what it could do. There were free courses available at the Atlanta location of the Foundation Center and she attended as many as she could. The concept of establishing a foundation was discussed with the ASET Education Committee members, the ASET Executive Committee led by President Adele Wirch, and then Executive Director, Sheila Navis. At the ASET Board of Trustees meeting in July, 2004, the motion to form the foundation was passed. On July 30, 2004, the ASET Foundation Board of Directors held the first meeting. The original board consisted of the Executive Committee of ASET (Adele Wirch, Scott Thurston, Gail Hayden), the members of the ASET Resource Development Committee (Leah Hanson, Sheryl Nehamkin), David Weaver as a vendor representative, and Dr. Ernst Niedermeyer as our physician representative. The Foundation was officially incorporated on August 12, 2004, in Missouri, and was granted 501(c)3 status by the U.S. Internal Revenue Service. By the end of January, 2005 the Foundation had exceeded $18,000 in donations.

The first project funded was a matching grant of $5000 toward the Education Forum held in Chicago in April, 2005. One of the outcomes of that forum was the determination that ASET should develop online courses in IOM, NCS, PSG and LTM. The next project funded by the foundation was the curriculum development grant for IOM courses to pay course authors. See Where Your Donations Go for what has been funded during the Foundation’s last completed fiscal year.

In November of 2006, ASET transferred the funds for the John Knott Educational Lecture Program, the John Archibald Student Scholarship, the Kathleen Mears Memorial Endowment Fund and the ASET Scholarship Fund to the Foundation.

Each year, the Foundation Board determines the number of scholarships and amount of each based on the guidelines for the individual scholarship program and the funds available.